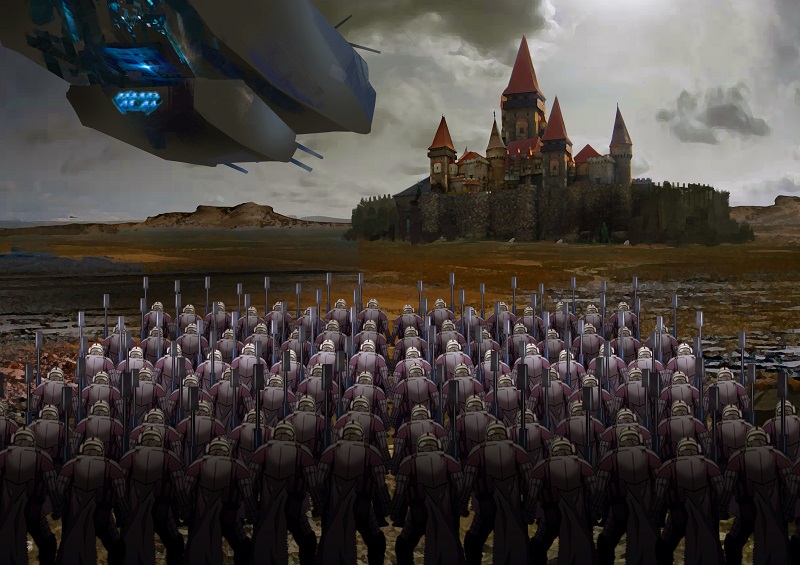 Watching from her airship high above the ground, War Maiden caressed the hilt of her blade as a legion of her finest troops approached the werewolf stronghold of Varuul. The filthy heretic dogs were staunch allies of the vampire scum, and by launching an all-out assault on the strategically important Varuul, War Maiden hoped to force Lilo.I and her friends out of hiding.

“Troops are within 300 meters of target, ma’am” the ground commander, Riya, radioed in, “The heretics have reinforced the walls far more than we thought!”

“Damn, someone will pay for this faulty intel!” War Maiden cursed just as a hail of enemy arrows and artillery rained down on her men.

“We’re taking fire, what should we do?!”

At War Maiden’s command, the Holy Land’s floating battleship hovered close to Fort Varuul and began bombarding the walls and arrow towers with cannon fire, allowing the troops on the ground to advance unharmed and enter the fort, engaging the wolves in combat. The heretics retaliated with prodigious artillery fire back at the airship, damaging several of its rotors!

“We’re taking fire! I’ve got to pull back, ma’am!” the airship admiral said, “but you better descend to the battlefield while you can!”

Thanks to War Maiden's intervention, the troops have sustained minimal casualties, but the airship can no longer assist with the battle. War Maiden is now in position to deploy behind the enemy walls, close to their castle and far from their main defenses. 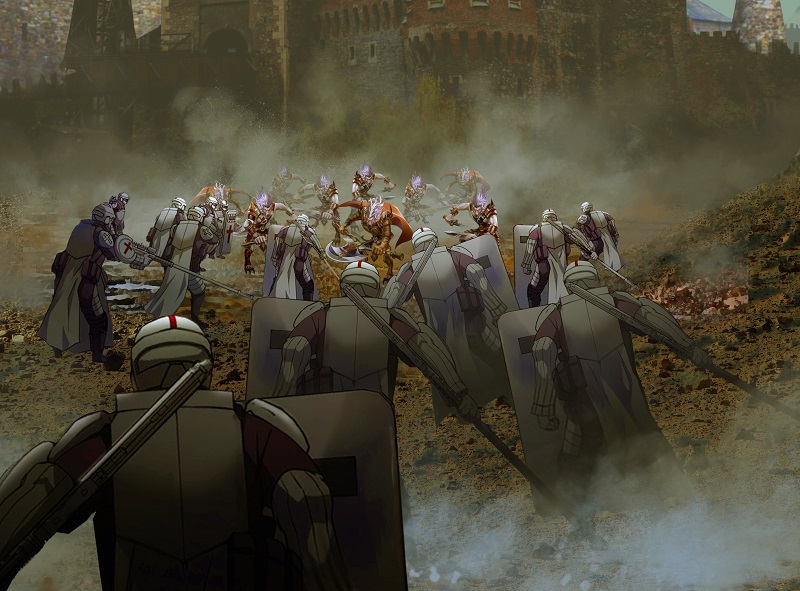 War Maiden, the Angel Squad, and a detachment of Gunmen beamed down behind the castle walls and were attacked by the fort's reserve troops. Like two dragonflies, Fina and Yuri zipped across the battlefield, casting their healing magic on their fellow Gunmen to ensure that their defense remained unwavering, while Thunder flew through a hail of arrows to take out the wolven archers.

While the winged warriors assisted the troops, War Maiden quickly found herself surrounded by a gang of wolves. Just when it seemed she would be overwhelmed by sheer canine carnage, a huge chunk of the enemy was smashed and swept away by Dagan’s mighty hammer!

“I am Dagan, I crush you with one smash!” the bald badass proclaimed as he delivered another unbelievable hammer strike, "Facial bones collapse as I smash your skull in half!" 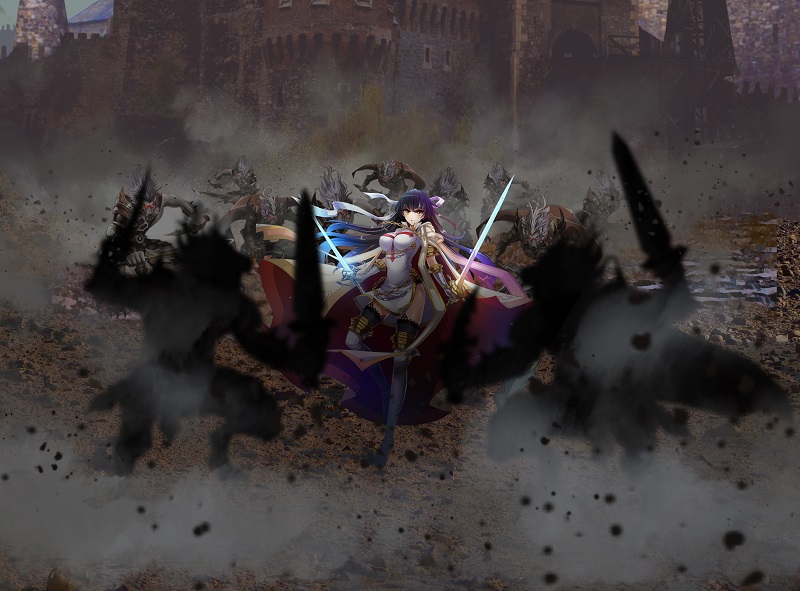 The wolves decided to retreat, and now able to move about the fort unchallenged, War Maiden decided to order the Angels to split off to accomplish a different objective while she and the Gunmen proceeded to the castle to confront the wolf leadership.

War Maiden's squad is largely unharmed thanks to the swiftness of the Angels and their healing, but the enemy wolves are still in formidable numbers as they chose to temporarily withdraw! The Airship, now damaged, is still unable to assist.

“I shall smash the gates open like I smash skulls open!” the chrome domed crusher decreed as he and the Angels flew to the rear gate. The winged angels distracted and defeated the guards while Dagan delivered an impossibly destructive hammer strike, shattering the gate as if it were a very elderly woman with the flu.

“Well done, Angels! Where is War Maiden?” Riya said as she and a group of Gunmen and Sacred Disciples entered.

Meanwhile, War Maiden and her Gunmen continued on to the castle, slaying every werewolf that stood in their way. Several Gunmen were blown to bits by the Artillery Towers, but Maiden and the surviving troops managed to break into the castle’s main foyer, where the Wolf Elder stood among his finest troops who had arrived from the barracks, along with the reserve wolves who had retreated earlier.

“Your swords may rend our flesh, Holy Land scum,” the Wolf Elder proclaimed, “but you will never take our freedom! Attack!”

War Maiden’s Gunmen have taken moderate casualties and reinforcements led by Riya are on the way. Aided by her loyal Gunmen, she launched into a twin-bladed assault on the wolves, slashing and stabbing so quickly that her attackers barely had time to realize that they were dead. Meanwhile, the more fatigued and injured Gunmen hung back and fired repeatedly at the foyer’s supporting pillars.

War Maiden’s flawless attack was halted when the Wolf Elder flew into a rage. Stomping through the battle, the Elder ripped several Gunmen who got in his way in half with his mighty cleavers before coming blade to blade with War Maiden herself.

“After I put this blade through that pretty face of yours, I’ll happily suck the flesh off your bones!” the Elder seethed as his frenzied attack managed to gouge Maiden’s hip, causing her to stumble.

It was at that point that the entire building shook; the pillars had been destroyed and everything was collapsing. War Maiden and her surviving Gunmen were swiftly carried away by the Angels, who arrived in the nick of time. The foyer ceiling then came down, crushing the Elder and every wolf inside! 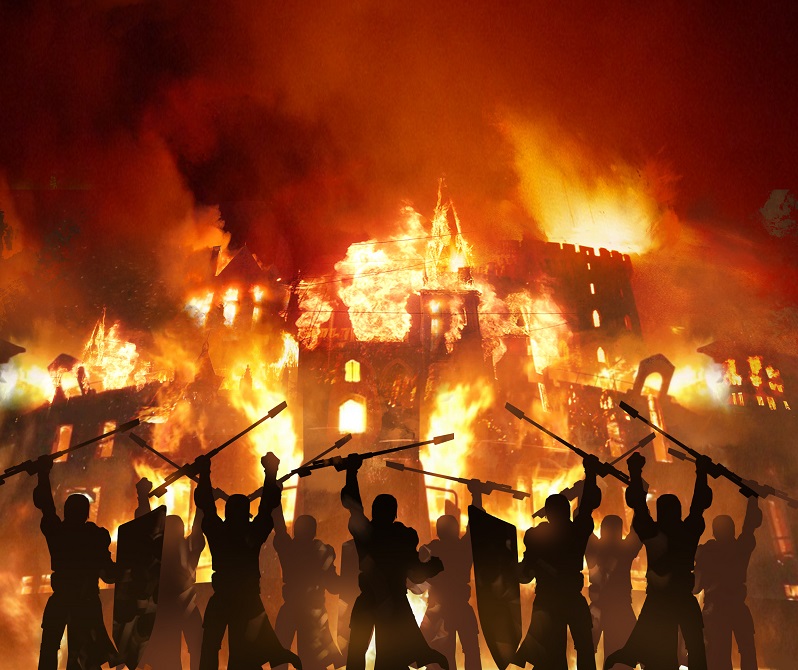 With the battle won, the Holy Land proceeded to set fire to the fort. As War Maiden watched Varuul burn from her ship while rubbing her now bandaged injury, Riya approached her from behind. “Many of the werewolves have escaped, but a few have surrendered to us. What shall we do to them?” asked Riya.

“Tell your fellow inhuman scum, especially the vampire witch Lilo.I, that the Holy Land has burned Varuul to the ground!” Riya said as her men prodded the surviving werewolves to retreat into the wilderness.

With the Battle of Varuul won, the Holy Land continued its unstoppable conquest of the heretic lands. Word spread quickly across towns that harbored non-humans, and many were driven by fear to expel all heretics and swear allegiance to the Holy Land!

Retrieved from "https://bloodlinesea.fandom.com/wiki/The_Battle_of_Varuul?oldid=2667"
Community content is available under CC-BY-SA unless otherwise noted.