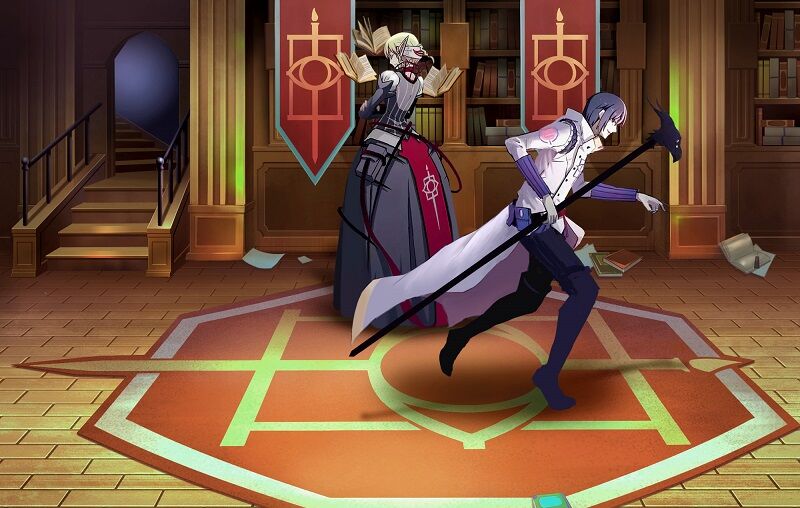 “Damn it, there’s a third link!” said Destroyer Roy as he hurled a heavy grimoire across his study. He had spent a near-eternity studying Lorus’s Fourth Grimoire, said to contain the origin arts necessary to unlocking one’s “Fate” and the powers that came with it. All he had to do, according to the grimoire, was become magically linked with War Sorcerer Last and Sorceress-In-Chief Ruthtria. When nothing happened, Roy redid his calculations and divinations and conjured an image of a third figure he needed to become bonded with: an enormous machine of seemingly infinite power. A golem.

He suddenly remembered that deep within the lowest levels of the Dark Tower were remnants of a previous order of sorcerers, who tried to create machines of war to do their bidding but were destroyed by them instead. These lower levels were sealed and barred from entry by Ruthtria herself, but it took barely a second’s consideration for Roy to dismiss his master’s strict rules and begin his incursion into the Dark Tower’s forbidden zone.

Roy picked up his staff and began making his way downstairs, but it was just the worst of luck when Ruthtria herself happened to be in the Library of Restoration, which he had to pass through to get to the forbidden level. “Ah, Roy. You seem to be in quite the hurry. Anything I should know of?” Ruthtria asked.

“Actually, yes. Remember the lower levels that you sealed off years ago because of the dangerous golems in there that slaughtered the Sijiik Order? I’m going there now to see if I can turn them back on. Would you like to join me?”

Ruthtria dropped her books, outrage consuming her face, “I BEG your pardon?!” she seethed, using her powers to lift Roy off his feet in a magical chokehold.  “Grghh! Hear me out, Master Ruthtria! I think I have a way to control these machines! <Gack> I just thought you’d appreciate my honesty and help me out!” Roy said between struggled breaths.

“You INSOLENT piece of…” Ruthtria said, tightening the chokehold.

“Arlghk! Look, just go down there with me! I promise if things go wrong you can punish me however you like! I’ll sweep the toilets! I’ll…I’ll…anything you want! Just give me a chance! ONE CHANCE!”

Ruthtria continued to torture her student, but relented after a moment of thought. Roy collapsed to the floor, gasping for air. “Very well. I’ll accompany you, if only to make sure you don’t do anything stupid. But this is YOUR idea and you will take full responsibility for whatever happens.”

“Th-Thank you, Master Ruthtria. You won’t regret it, you’ll see!”

With that excruciating ordeal over, Roy and Ruthtria made their way down several winding corridors and rooms, past the atrium, where Uygur and Belle were flirting with one another, and past the treasure chamber, where Last was reading up on ancient vampire history. “All these fools,” Roy thought to himself, “It’s disappointing that being the best is so easy because everyone around you is so mediocre!” 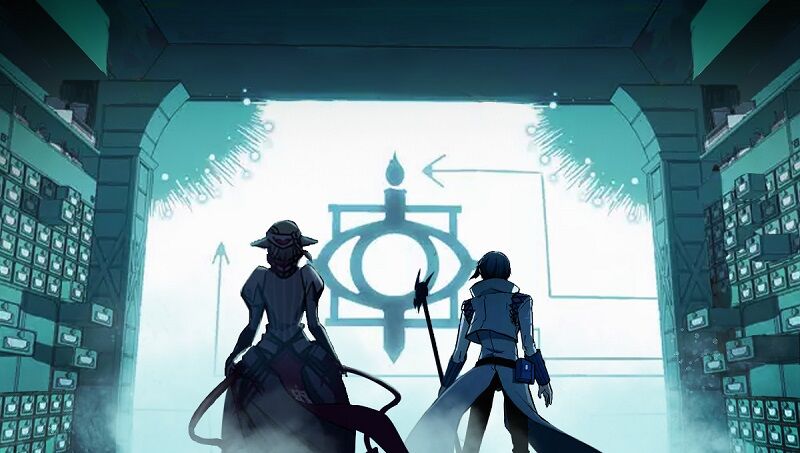 They finally arrived at a cavernous room, where a large door stood at the end; surely beyond it lay the mighty golems that would allow him to unlock his latent powers! It was, however, protected by a barrier of protective energy conjured by Ruthtria years ago.

“I’m not helping you dispel that,” Ruthtria said, “Like I said, this was your idea, so you figure it out.”

Roy backtracked to the treasure room, where Last was reading the Kindred’s Lexicon, one of the most sacred and ancient works of vampire literature. Roy then explained the situation to Last, who grew more concerned the more his colleague spoke.

“No. You shouldn’t be dabbling in something even Ruthtria finds too dangerous,” said Last.

“C’mon, ol’ buddy! Ruthtria’s cool with it! She came down here with me, remember?” said Roy.

“She came down so she could say ‘I told you so’ to your face once your little expedition goes horribly wrong!”

“No means no. I’m not doing it,” Last replied, returning to reading the Kindred’s Lexicon.

Roy was just out of ideas when the proverbial light bulb above his head lit up. He snatched the Kindred’s Lexicon from Last and pointed his staff at it.

“I’ll make this simple, ol’ buddy! Help me open the barrier or the only thing the Kindred’s Lexicon will be good for is toilet paper!” Roy said as sparks of electricity jumped from his staff, dangerously close to the sacred tome.

“You’re insane! Do you know what’ll happen if you…?”

“You’re sure you wanna do this? ARE YOU SURE?!” Last said.

A big smile stretched across Roy’s face as Last reluctantly dispelled the barrier with his superior magic. Roy then gave the Kindred’s Lexicon back to Last, who angrily grabbed it.

“Coming?” Roy said as he and Ruthtria entered the lightless forbidden zone.

“Go to hell,” Last said before turning to Ruthtria, “Master Ruthtria, you don’t need to be a part of this.” 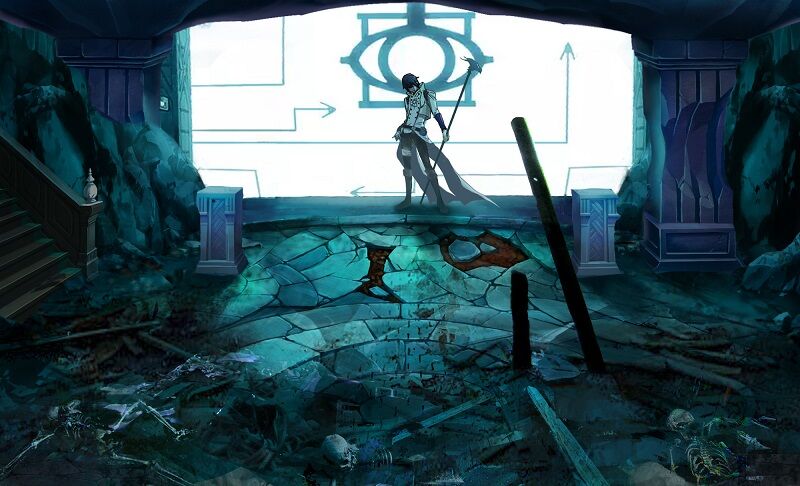 Ruthtria and Roy then cautiously entered the room. The air was stiff and the floors were littered with skeletonized corpses.

“Hear that?” Roy said. In the farthest end of the hall, the faint whirr of machinery could be heard.

“Follow me, Master Ruthtria,” Roy whispered as he cautiously proceeded down the hallway, his staff brimming with electrical energy. “That’s all I intend to do,” an indignant Ruthtria replied.

With a mixture of curiosity and slight nervousness, Roy got to the end of the hallway, and peeked his head around the corner. Before him stood a mighty golem of terrifying size, much larger than he had anticipated! Roy couldn’t help but marvel at the powerful machine, with its immaculate armor-plated torso, whirring mechanically with every movement.

Thankfully, its back was turned to him, so Roy had the element of surprise on his side. It was time to make a move. 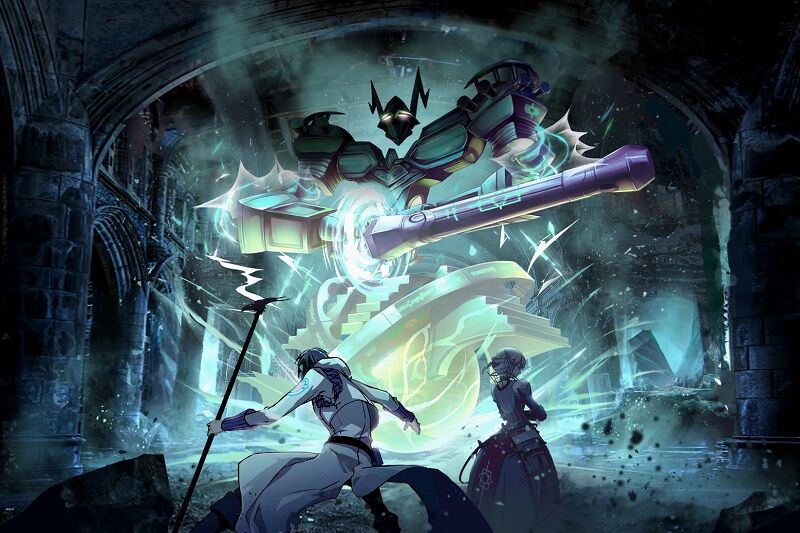 “You have no chance against that machine, Roy,” Ruthtria whispered, “End your foolishness now and let us leave this place forever.”

Roy let out a sigh of disappointment. Indeed, the Golem’s earth element powers would make short work of him. “You’re right Master Ruthtria. I have no chance against it,” he said. Then, out of the blue, the despicable sorcerer spun around, grabbed Ruthtria’s small body with both hands, and tossed her at the Golem! “But you do!!!”

The master sorceress was completely caught off guard by her disciple’s nefarious act. She hit the ground hard, right at the Golem’s treads. “YOU ARE TRESPASSING ON PRIVATE PROPERTY. I AM AUTHORIZED TO USE DEADLY FORCE,” the Golem’s electronic voice boomed as it raised its gigantic fist to pound Ruthtria.

“Roy!!! You coward! You miserable pile of excrement!” screamed Ruthtria as she got up and unleashed her magical powers on the Golem, blocking its attacks with her own forcefield before slowly driving it back with ethereal force. Only Ruthtria’s sheer power was able to withstand the Golem’s impossible strength!

With both Ruthtria and Golem locked in combat, Roy craftily made his way around, flanking the Golem from behind. “Bow before your new master, o great machine!” he declared as he casted a complex electric spell to disrupt the Golem’s circuitry.

“FIRMWARE INTRUSION ATTEMPT DETECTED,” the Golem said. Neither it nor Ruthtria were able to divert their attention away from their true enemy, Roy, and both were growing weaker the longer the fight went on.

As Roy’s hacking spell worked its way around the Golem’s systems, Ruthtria was just about at the end of her rope from maintaining both her defensive and offensive spells at maximum power simultaneously.

After seemingly an eternity, the Golem jolted to a standstill and shuddered violently, ceasing its attack. “ACQUIRED COMMANDING AUTHORITY. AWAITING FURTHER ORDERS,” it said. Roy clapped his hands and jumped for joy. 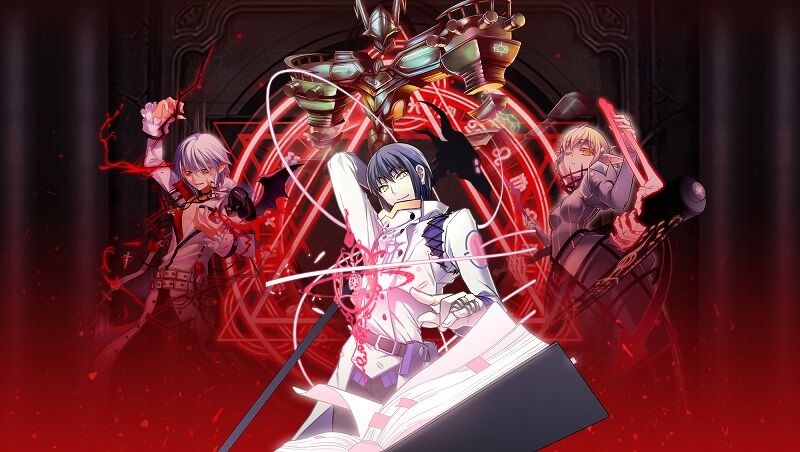 “Master Ruthtria! I heard the noise; are you alright?” Last said, arriving at Ruthtria’s side and helping her stand up, “What the hell did you do, Roy?!” “I did what no one in this place could,” Roy said as the Golem stood behind him obediently, “you should be thanking me.” “Thank you?!” Last said as he helped up a fatigued Ruthtria.

“You put our master in danger!!” Last shouted as dark energy gathered round him.

“Damn right, but now the Fate Link is united, and my powers are complete,” Roy replied, his staff radiating with an abnormally bright glow.

“He’s right, Last,” Ruthtria said, having regained her composure, “I’ve known about the Fate Link for some time, but could never conjure the right projections to discover it for myself. Roy, you are a bastard. An insolent, sniveling bastard and under most circumstances, I’d have reduced you to a blob of goo for what you just did to me. But you are my best student, and you have proven that again today.”

Ruthtria then turned around, leaving the area while Last accompanied her after shooting Roy one last angry glare, “The Golem stays here for the time being until we figure out what to do with it,” Ruthtria said.

Victorious, Destroyer Roy petted his new Golem servant. The circle was now complete; with Last, Ruthtria and the Golem now bonded to him, he felt a growing power rising within him. He turned to a nearby pile of rubble and zapped it with his lightning spear, which was now considerably more powerful, instantly vaporizing the debris.

“Fate is what you take for yourself.”

Retrieved from "https://bloodlinesea.fandom.com/wiki/Secrets_of_the_Dark_Tower?oldid=2673"
Community content is available under CC-BY-SA unless otherwise noted.