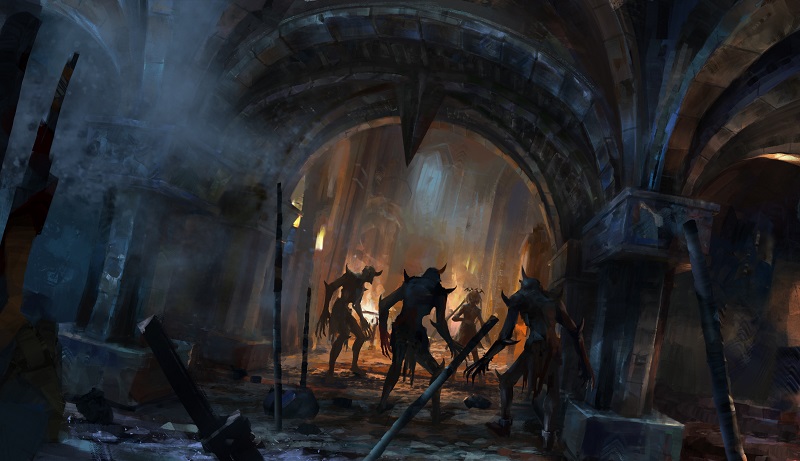 Passing through a cavernous entrance, Lilo.I steeled herself and moved further into the bowels of the mysterious ruin, Jobbskifte. She had heard that within its deepest corners lay a being of untold power. She grew wary at the sight of the skeletal remains of fallen warriors who came before her in search of that same power and it wasn’t long before she realized what claimed their lives: a horde of ghouls that now surrounded her! “There’s so many of them!” she thought, “I need to think carefully about what to do!”

ike a well-trained ballet dancer, Lilo.I twirled around the ghouls while slicing them to bloody bits in a tornado of sword strikes and flying dismembered limbs. A couple of them managed to strike her, but she shrugged off the damage and continued the slaughter!

After carving a swathe into their ranks, Lilo.I sprinted across the chamber and kicked down a nearby door, startling a heavily armed girl on the other side! “A fellow adventurer!” she said, “I’m Moni. I take it you’re also in search of the treasure here? Let’s join forces!” Lilo.I agreed, just as another wave of ghouls advanced towards them! "How do you want to handle them?” Moni asked. 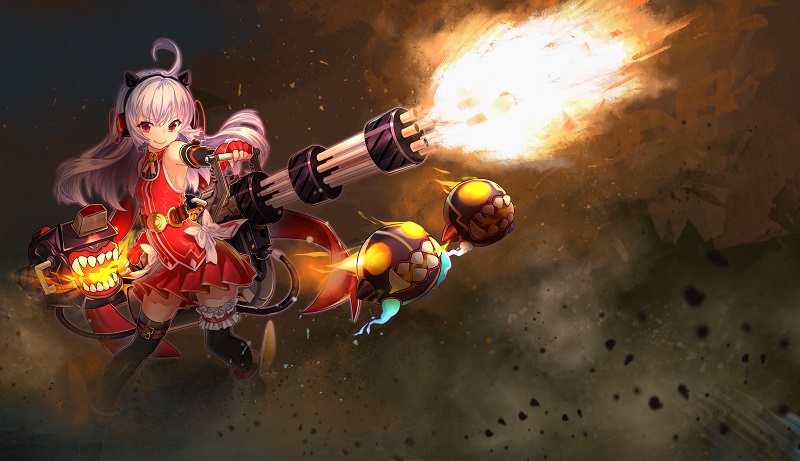 “Stay back and suppress them!” Lilo.I said as she eviscerated the ghouls with inhuman ability, causing Moni to gasp in awe. A pair of ghouls pounced at the vampiress from behind, but Moni effectively vaporized them with a hail of 5mm explosive-tipped rounds.

As they advanced deeper, Moni saw a large door with mysterious symbols. “There!” she said as she blew it open with a missile, revealing a chamber with a pillar of light in the center.
As they approached it, a svelte woman wielding a katana stopped them. “Congratulations on finding your way here. I am Elder Mitz,” she declared, “You must defeat me before you can receive the blessings of Jobbskifte!”

Lilo.I, panting from fighting all those ghouls, readied her blade.

Lilo.I was winded, but her senses were still sharp! She deflected all of Mitz's attacks and refrained from striking out. Mitz strengthened her assault, growling in frustration at her opponent's impenetrable defense, but alas, she gained the upper hand with an unexpected kick to Lilo.I's shin!

Mitz raised her sword to deliver the killing blow, but at that point she heard an electronic beep behind her. It was Moni, who had sneakily maneuvered to her flank! “Dodge this!” Moni said, firing a missile that exploded next to Mitz, hurling her across the chamber. The master warrior cursed in pain and fled the scene!

Victorious, Lilo.I stood up and she and Moni approached the pillar of light. “Step forth, Lilo.I”, boomed a voice from within, “I am the Spirit of Jobbskifte. Many have tried, but only you shall be chosen to receive my blessing. Now make your decision.”

“Very well,” the voice said as a wreathe of swirling energy blessed LiloI with the powers of a Life Drinker.

“B-but what about me?” Moni protested, waving her arms.

“You are not experienced enough and besides, you destroyed my door. And I really liked that door,” nagged the Spirit of Jobbskifte, “Now get outta my home!!”

It didn’t take long for Lilo.I and Moni to find their way back to the surface. With a sigh of relief, Moni dropped her weapons and wiped the sweat from her brow. We make a great team. I have to return home in a few weeks to train more, but why don’t we join forces until then?”

"Hell yes, I could use your firepower!" said Lilo.I.

“Awesome!!!” Moni shouted as she reloaded her weapons, “Lead the way!”

With new Life Drinker powers and a new (temporary) ally, Lilo.I began her trek back to her hideout, where Ron was waiting, so that the two could resume their quest to find Last and Rae!

Retrieved from "https://bloodlinesea.fandom.com/wiki/Descent_Into_Jobbskifte?oldid=2653"
Community content is available under CC-BY-SA unless otherwise noted.